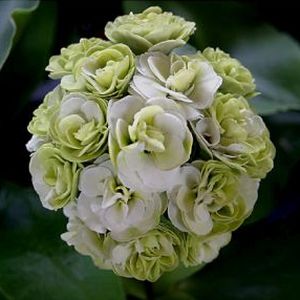 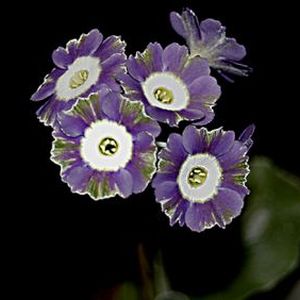 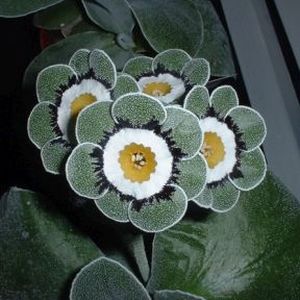 
The Society archive holds an assortment of material available to members for enjoyment or research and include among a host of other items:

‣Year books from 1904 to the present day, available in electronic format.
‣Profiles of our cups and trophies and those who donated them
‣Auricula theatres and their history
‣Old nursery catalogues
‣Committee minutes from 1873 to 2010
‣Collections of magazine and newspaper articles on Auriculas and Primulas; including a collection from 1873 to 1903 before our Year books started.


Any member who would like a full list of its contents, please e-mail the Archivist, Lesley Key on naps1873@gmail.com.

This page will be updated monthly, to share interesting extracts from the Year books and to introduce past members who shaped the Society.


The second in the series looking at some of our noted past members. This article taken from the 1929 Year Book.

The Victoria Medal of Honour (VMH) is awarded to British horticulturists resident in the United Kingdom whom the Royal Horticultural Society Council considers deserving of special honour by the Society. 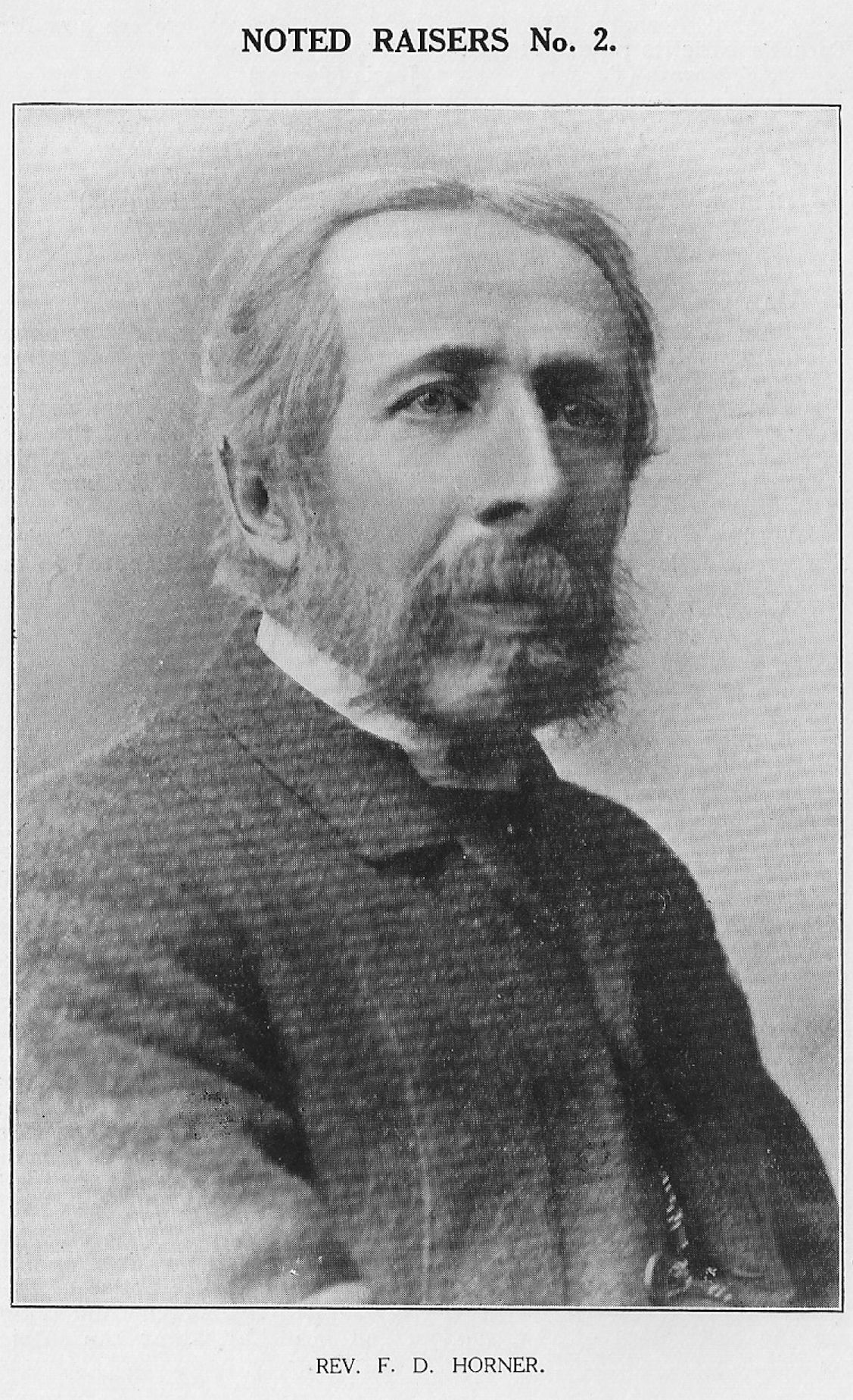 
"The Rev. Francis Daltry Horner, M.A., V.M.H., was the last link with the old generation which raised George Lightbody, Lancashire Hero, Richard Headley, and other flowers now superseded. He was the son of Dr. F. R. Horner, M.D., F.R.S., a well-known florist and writer on floriculture in the gardening papers of his day. Mr Horner was born in Hull, in 1837, educated at Ripon and Trinity College, Dublin.


He entered the Church, and while incumbent of Kirby Malzeard, near Ripon, he was able to indulge his taste for flower-growing, and to produce those wonderful Tulips and Auriculas which are still remembered by some of our older members. While living in Kirby Malzeard our Society was brought into being in 1873, and he was its first Honorary Secretary, a post he retained until 1891. Mr Horner did important work for the Society, and it was largely due to him that it exists at all.


Some of our eldest members can recall the very pleasant hours spent in his company. He delighted to discuss the merits of various varieties over a pipe, and match after match would be used to aerate the soil as the specimen was lovingly handled.


A story is told of how on one occasion he travelled to a London show with a plant in a glass case, so that its mealy foliage might not be damaged.


Mr Horner delighted in raising seedlings and in collaboration with Mr Ben Simmonite, of Sheffield, thousands of seedlings were raised. He is known amongst growers as the raiser of Heronine, Favourite, Buttercup, Orient and Ossian.


For many years he lived at Burton-in-Lonsdale, amongst his favourite flowers, but for some years was laid aside by illness, and the end came on 11th July, 1912."


This month, an article from the 1932 Year Book - the author is not identified. It is interesting to note the change in our thinking, especially with regards to pots!

Pots. With many plants the precise shape of pot does not matter much, providing that it affords proper space for the roots, but in the case of Auriculas preference should always be given to pots that are exceptionally deep in comparison with their diameter at the top. The plant forms a long tap root, and the ordinary pot does not give the depth which is desirable. Do not overpot, 4 inch pots for full-sized plants, or slightly larger for the very robust varieties, being ample.


Soil. No one will deny that the Show Auricula is worth the special pains bestowed, and given a suitable compost of, say, 8 parts turfy loam, 2 parts leaf mould, and 1 part manure thoroughly decayed, with sufficient sand or crushed oyster shell to give porosity, no difficulty will be found in their management. The soil should be just moist.


Re-potting. When the flowers fade, re-potting may be taken in hand at once. Shake out the old soil and examine the end of the "Carrot"; if found brown and soft it must be cut back to where it is white and sound throughout. One or two varieties have a purplish wood; this must not be mistaken for rot. When this basel rot has been in evidence, it will be wise to re-pot the plant into a pot at least one size smaller than before. The plant should be put in fairly low, in order to allow for top dressing in the Spring. The soil must be made fairly firm, and after re-potting the plants they will be all the better for being somewhat close for a week or two and protected from strong sunshine, not more water being given at this stage than will just prevent flagging. During this operation of re-potting, the roots are almost sure to want cleaning from the woolly aphis, which is the most constant in attendance of all enemies of the Auricula. This can easily be done by a touch of methylated spirits applied by a small camel-hair brush to the affected parts.


Cultivation. The following hints should be observed:- Damp in winter and drought in summer should be avoided. water should be applied very sparingly while the plants are at rest, and care should be taken that it does not lodge in the hearts of the folded leaves. During the period from the beginning of November to early February, ample ventilation is necessary, and should not be withheld even during frost; but once new growth has started and flower buds have formed, it would be well to protect against frost. About the middle of March disbudding must be started in the earliest blooming sorts, and some judgement will have to be exercised in leaving a nicely balanced truss.


Our first look at some of the items from our past Year Books, we start this month with one of our renowned growers.

Ben Simmonite was one of the founders of the original society in 1873. His death was noted in the 1910 Northern Section Year Book:


"It is with mixed feelings that one writes the report of our thirty-sixth annual show; for the recent death of Mr. Ben Simonite (sic), who had worked so long and so faithfully to improve the flower that we love, cast a shadow over us all. ....."


The Northern Section 1928 Year Book began a series of articles on the Society founders, there only being the one Society in 1873, the first in that series being Ben Simmonite. 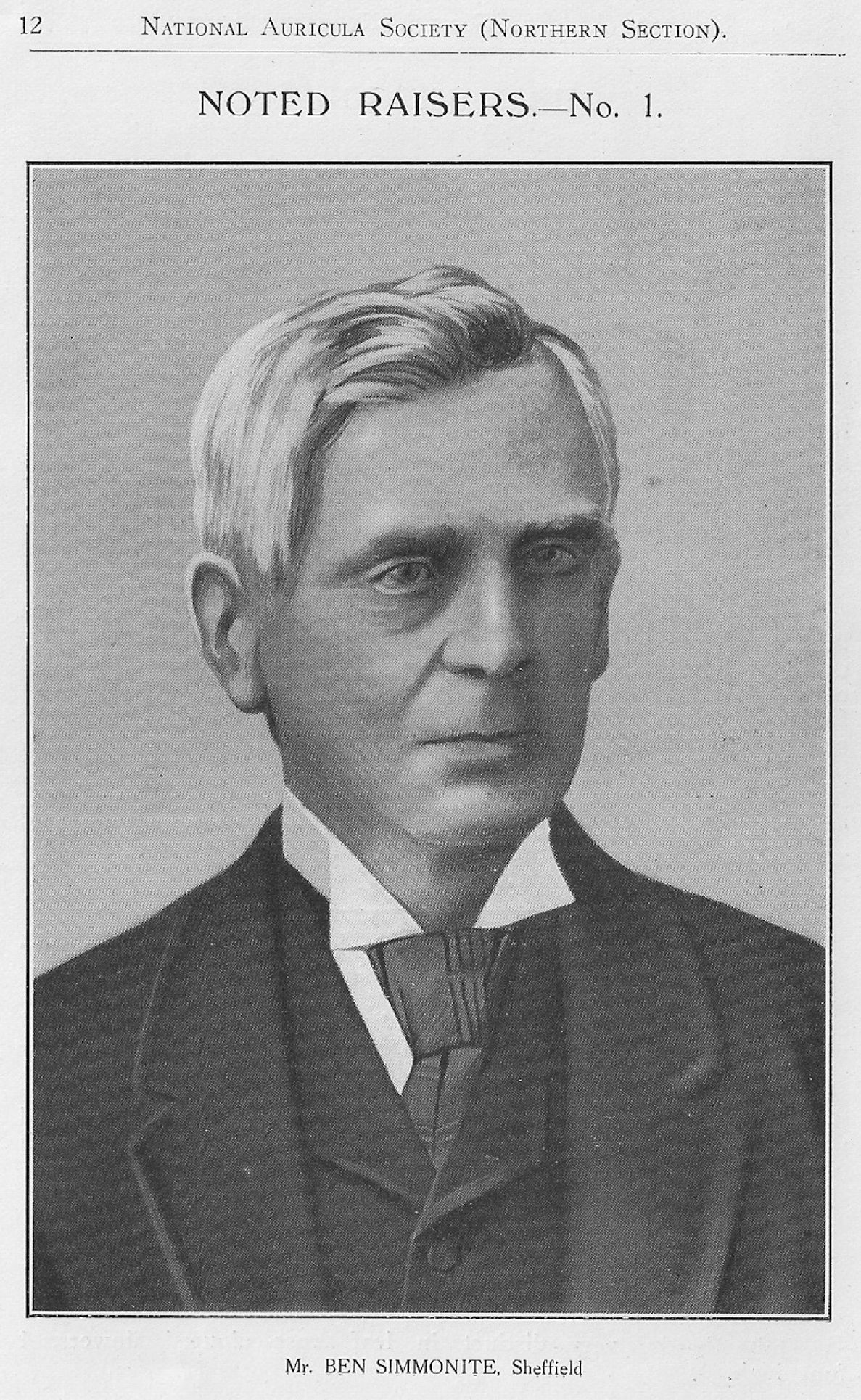 
"We are justly proud of this Northerner, and all Auricula growers owe him a debt of gratitude for the work he accomplished.


When a youth he came in contact with Horner, afterwards the Rev. F. D., and the closest friendship was established through their mutual love of the Auricula. It is well known that they exchanged plants for the sake of the pollen, and Simmonite acted the distributing agent. He once told a friend that for the first ten years he never raised a thing worth a brass farthing. Nevertheless, he was the actual raiser of Rev. F. D. Horner, Shirley Hibberd (another old friend), Dr. Hardy, Raven, Ruby, Gladiator, Cleopatra, and about a score of others. There was little concerning the Auricula and Polyanthus, either as regards cultivation or history, that he was not conversant with. Born June 24th, 1834, died March 29th, 1909. On his tombstone in the Cemetery, City Road, Sheffield, is a medallion of an Auricula plant."